Right now I'm just taking an hour or so's break from reading for my dissertation, which is going pretty slowly and I need to get up earlier tomorrow so I can fit more in. I've a couple of thousand words due over the next week - I had to set up a later deadline with my tutor due to some personal stuff last semester, but he seems more than happy to allow this. Better to get something submitted, albeit slower than I'd like, than nothing at all!

The last couple of weeks have been rocky, but I'm still here, still reading texts for uni and making decent progress on the overall plan for my diss (I also managed to get 85 in a policy essay, which I'm over the moon about!!). Working only weekends has been a big help. Not that I had any choice, mind, as there are usually hours savings made in the post-Christmas retail slump. I can't complain, though - it's nice to have a bit more separation between academic work and paid work and it means (theoretically) that I can enjoy not having to think about state criminality or heavy political theory for a hot second.

Musically, I've been toying with my 15-year old indie kid roots (remember those?) and getting into deep Joni Mitchell holes. I'm particularly enjoying The Hissing of Summer Lawns, which I understand to have been less than well received back in 1975. I can see why people may have been wary of the new sound and less personal lyrical direction, but I did read an insightful article about the album by Pitchfork (*snob klaxon*) that mentioned some of the later reactions from artists like Kate Bush and Björk, both of whom were big fans of Joni's vocal changeability to convey styles and emotional meaning. One of the songs (the second track, I think?) on the album seems extremely ahead of its time (choppy instruments, deep moody vocals) and I'm always quite taken aback by how nineties it sounds. It's also worth noting that Mitchell has long been the subject of the implicit snubbing that comes with music industry sexism and I'd agree with Pitchfork (and Mitchell herself) that the underwhelmed reaction to the album was not necessarily something male artists/bands with similar sounds were facing. All things aside it really is a great album with ingenious songwriting and I'd definitely recommend giving it a listen if you haven't already!

Did anybody watch the Oscars? I didn't, but I gave the results a quick peruse on Google. My main focus, however, was Janelle Monae's performance. Anyone who follows me on Twitter probably knows how much I love to go on about JM and how much of a genius I tell everyone she is. Cardigan malfunctions aside, I loved that she brought back a song from an older, more funk-focused album than her latest and added some commentary on the whiteness of the Oscars to boot! She also garnered some of the 'drunk' commentary from the NYT which was quite funny. Check out her performance below! (i will never stop trying to get people to listen to her music lol)


My partner and I recently watched the final season of Bojack Horseman (skip this bit if you haven't watched it yet!), which is at this point probably my favourite show. I've always found the visual and written humour to be incredible and it always feels like the perfect mix of funny and deep. I think I like the animated format for that reason - most live action shows that explore deeper topics feel overly serious and don't capture something key about real life: that real life is forever a mix of wacky and emotionally sincere. The penultimate episode really hit hard, especially Sarah Lynn's reprise of a song featured in the previous season (Kristen Schaal is an incredible voice actor and also plays Louise in Bob's Burgers!), the poem "The View from Halfway Down" (*cries uncontrollably*) and the last phone call with Diane ("you didn't pick up." "nope" killed me right off). The finale was equally good and I found the personal reflections between the characters to be really heartfelt and understanding of the reality of complex human relationships. One thing that really stuck with me was when Diane talks about being happy for having lived in LA, but not being nostalgic for it.


"I think there are people that help you become the person that you end up being, and you can be grateful for them even if they were never meant to be in your life forever."

I found this to be a particularly poignant (hehe) bit of dialogue, and it really got me thinking about my own life and the relationships I've formed and lost. I've often spent time feeling guilty for past actions or having not said the things I wish I did, but lately I've been trying to be a bit less harsh on myself and accept that the things I say and do were always within the context of my life at the time. After all, we're all just trying to get by as best we can and I can't spend swathes of time being angry at my younger self. (woah dude that's sooo deep)

Anyways, me being overly emotionally-invested in a cartoon aside, my partner recently bought a new fish tank! It's currently home to a Betta fish, some shrimp, and my personal favourite, three cory catfish! They're really funny to watch and love to burrow in the sand in search of food and algae. They also tend to stick together and move around in close proximity which is always fun. Having the tank lights set to different colours is super relaxing and makes everything feel very 70s-lecturer crossed with neon 2014 tumblr. Which as we all know is the vibe everyone secretly wants.

There's not too much else going on in my life at the moment. I did perfect my aubergine katsu curry with tempura-ish batter (mostly based on trial and error. who has the time to read recipes? not i) and I've been avoiding twitter and anything remotely Labour related. Working on my neocities site has been a nice dose of nostalgia, but also a creative outlet where I can actually stimulate my hell-brain with coding and designing pages. I've slowly uploaded some of my poetry/prose, most of which I wrote on placement last year when I co-facilitated a creative writing group for the mental health charity I was working for. I do miss the opportunity to write something different each week and I would eventually (probably after uni, mind) like to get back to writing with prompts and adding to my currently bare-bones sci fi prose project.

I've also been trying my hand at pixel art, as I've mentioned in previous posts. Currently I'm learning to shade and work to 3D perspectives by drawing a Habbo-style bedroom, which isn't anywhere near finished atm. I did, however, make something a bit less complex and video game-esque, inspired once more by our old friend 2014 tumblr. Let me know what you think! (it's pretty basic, mind) 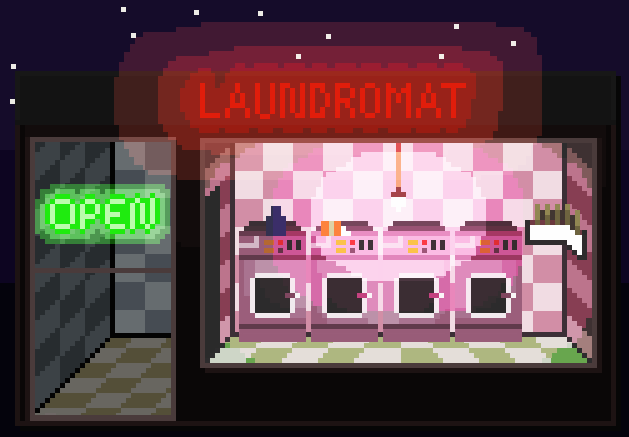 As I said earlier, most of what I'm doing right now is either slowly working on my diss, reading for seminars or serving customers in a supermarket. My other deadlines are in May, which is a bit of a load off, since I struggle with time management a lot and can take 10+ hours to read a small 15 page text. I've just finished a round of counselling and am feeling more stable mentally and academically, but my counsellor did recommend that I pursue a diagnostic assessment for attention disorders (long story, for another time) at some point. I'm not sure if I'll have the time to focus on that during this semester (waiting lists would take me beyond this year anyway) so it's something I'll probably come back to in the Summer. By then, I'll have moved into my new house and secured a full time/longer contract at work and won't have to worry about anything academic. Everything feels a bit wild and fast-moving at the moment, but in all honesty that's what my entire uni experience has been and I've mostly grown to accept it and go with the flow. On that note, I'm off to make some spicy pasta x